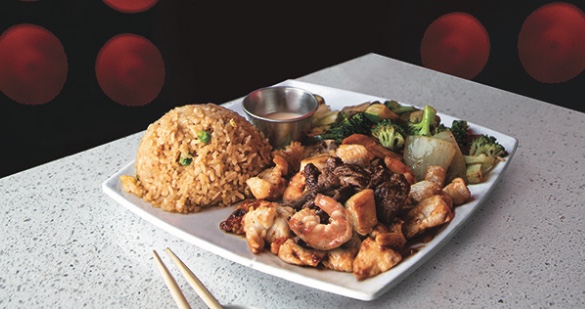 The walk of shame — it’s here again. Those resolutions made in good faith simply leave you feeling defeated weeks later. You intended to start eating in ways that support, rather than defy your body — getting leaner, healthier, more energetic. Setting good intentions is never wrong, but maybe it is the same old approach that is the failure. Diets are big changes that are often unsustainable in busy lives. Success might be better found in a gradual, mindful shift — eliminating a few bad choices at a time, replacing them with better options.

Are you the person who darts out for lunch, grabs fast food for the kids before practice and orders online for dinner? In our multicultural society, there are many Asian foods — Chinese, Thai, Vietnamese — that support a busy lifestyle. When you think of Japanese, though, you might relate it to performance restaurants or quick sushi pick-ups. In reality, Japanese cuisine offers many options that rival other Asian fare for flavor and nutrition. Its benefits definitely surpass American cuisine. Comparisons of weight and longevity between Americans and Japanese show major gaps, among all age groups. Uh-huh, you know who’s doing better!

Sushi can be a polarizing item. It either has people smiling or flinching. The latter is often due to a common misconception. It was not — and is not now — raw fish.

In the 18th century — read: non-refrigerated — Japan, fish was served cooked, not raw. In fact, now many sushi rolls are served baked or fried. Yes, even locally!

“We make sushi a lot more approachable than the typical Japanese restaurant experience,” explains Chris Alley, Director of Op- erations for Little Rock’s two Rock N Roll (RNR) Sushi restaurants. “So while we do lean on the traditional Japanese methods, the presentation and the recipes we use are a lot more geared to Americans.”

Case in point: the fried Sweet Home Alabama Roll. This tribute to the franchise’s birthplace is smoked salmon, Krab stick, cream cheese and avocado, which with its toppings of spicy mayo, eel sauce and crunchy flakes round out to the best 806 calories you have ever had. They’ll happily bake or fry any roll you like. Oops — got that low calorie thing going on? Just know this is actually one of the few higher-end caloric menu items on the menu (it can be your cheat day). One of the truly great things about RNR? Every item gives the calorie count, even differentiating if fried or baked. Grab that calculator. You can eat guilt-free easily and have multiple items — more to love! Another bonus? Eating here is just a whole lot of fun. You knew that with a name like Rock N Roll Sushi there would be more than a few wild riffs going on.

The doorway greets you with the sight of adults and kids alike rocking out to music videos, doing the ’80s and ’90s thing. How cool is this place? Think booths of red leather, chrome chairs, a look as sleek as Fonzie’s hair, but totally contemporary. Things are just getting started.

Yes, the menu has calorie counts, but it is also set up in a way that makes it easy to understand what you’re ordering if this is new territory for you. It goes like this: Opening Acts (appetizers), Green Room (salads), Headliners (rolls, see Classics, also), Hibachi Back Stage and After Party (desserts). Within each category are menu items wrapped in a great sense of humor, like the Veelcro Pygmies roll. Kids’ menu? Yep, complete with chicken nuggets. Don’t expect to see much of that here though.

“I am blown away weekly by the adventurous kids that come into our restaurants,” Alley says. “Often without the slightest bit of hesitation they will try things the adults hesitate over. Kids palates these days are very advanced. They’ll probably drop you with their chopsticks moves too.”If you think mixing rock ‘n’ roll with traditional Japanese recipes commingled with Southern accents was unthinkable, here’s the whole backstory. The first location in Little Rock opened in May 2020, just as COVID-19 had us all in bunkers. The second location was hard on its heels, opening in July. This defied the statistics for survival in the restaurant business.

Things are only going to be amplified soon. In the first quarter of 2022, two more locations — Conway and Benton — will be opening. DoorDash, Bite Squad, Uber Eats and Grub Hub will bring it to you, as will their own in-house delivery service. Curb- side is available too, as well as online orders picked up inside.

With a little thought — and great choices — this year will be the last walk of shame ever. A Japanese tradition? Before the meal, say “itadakimasu” (pronounced ee-tah-dah-dee-mah-su). Translation? “I humbly receive.” To the great Japanese and American chefs, we happily offer our thanks for their awesome food. It’s eat more, grow less time!