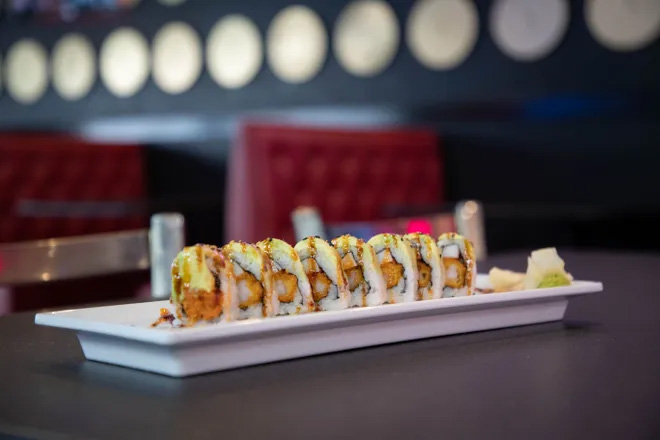 The restaurant’s slogan is “Sushi, Amplified.”

This is not your typical sushi restaurant.

From red leather seats, gold records and a wall of televisions airing rock videos from the ’80s and ’90s, the new Rock-n-Roll Sushi restaurant is something unexpected at Market Square on Timberlane Road.

It opens Monday, making it the concept’s first franchise location in Tallahassee. Sam Osborne hopes it will be a place where people not only love the food but love the decked-out décor.

This may be the first of several locations. Osborne, who’s made a career of franchising, plans to open another three or four in Tallahassee.

“I got excited about it from day one,” Osborne said. “I love sushi, but the one thing that’s always the same about all sushi places I’ve ever been to.

The Tallahassee native spent his childhood and adult life here, except for about four years in the U.S. Air Force. Osborne, a Florida State grad, got his undergraduate degree in business and cut his teeth at Tropical Smoothie at Market Square, its first franchise location in the nation.

That was two decades ago. Now Osborne, also the franchise owner of Island Wing Company on Market Street, is one of three partners betting the Rock-n-Roll concept will prove an attractive venture.

Osborne was sold on its American take on sushi, coupled with the rock motif. He said the restaurant is a fusion of what people love about sushi, without the intimidation factor.

“This is sort of like walking into a Hard Rock Casino with sushi and we have hibachi as well,” Osborne said.